The True and Pure Book and Movie of the Year award is an unofficial, created-by-me award. I recognize what I consider the best book I read and the best movie I saw in the previous year, along with a runner-up in each category.

I make an effort to choose more modern books, since we can all agree that classics are classics for a reason, and my goal is to help you find amazing media that you might not have heard of or be unsure about. But the award in general is not limited to media that was released this year. I choose out of everything I read and watched in the course of the year, not only things that are brand-new.

You can find previous awards here:

Book of the Year: Circus Mirandus by Cassie Beasley (2015)

Do you believe in magic? Micah Tuttle does.

Even though his awful Great-Aunt Gertrudis doesn’t approve, Micah believes in the stories his dying Grandpa Ephraim tells him of the magical Circus Mirandus: the invisible tiger guarding the gates, the beautiful flying birdwoman, and the magician more powerful than any other—the Man Who Bends Light. Finally, Grandpa Ephraim offers proof. The Circus is real. And the Lightbender owes Ephraim a miracle. With his friend Jenny Mendoza in tow, Micah sets out to find the Circus and the man he believes will save his grandfather. (from Goodreads)

If you loved The Night Circus, or if you have any kind of interest in magical circuses, or if you like children’s books that feel deep and meaningful and old-fashioned in the best way, Circus Mirandus is for you. The magical-circus atmosphere is lovely, and the story is wonderful. It doesn’t use magic as an excuse, presenting realities of life in a way that doesn’t deny their weight. But it does it in a childlike way, balancing innocence and hope with the pain.

I’ve been really enjoying children’s books lately, and it’s always a delight to find more recently-published books that have this kind of quality and depth. Unlike the runner-up, this one isn’t a Christmas read necessarily, but the magical feeling lends itself very well to this season. It would be a great family read-aloud, a great one to give to younger siblings, or something to read by yourself on a cozy winter day beside the light of the Christmas tree.

It’s wintertime at Greenglass House. The creaky smuggler’s inn is always quiet during this season, and twelve-year-old Milo, the innkeepers’ adopted son, plans to spend his holidays relaxing. But on the first icy night of vacation, out of nowhere, the guest bell rings. Then rings again. And again. Soon Milo’s home is bursting with odd, secretive guests, each one bearing a strange story that is somehow connected to the rambling old house. As objects go missing and tempers flare, Milo and Meddy, the cook’s daughter, must decipher clues and untangle the web of deepening mysteries to discover the truth about Greenglass House-and themselves. (from Goodreads)

This is another more recently-published children’s book that has an atmosphere very similar to The Mysterious Benedict Society. I love it because it has the innocent feeling of childhood, but yet is a complex and deeply meaningful story with real conflict. The characters are interesting and complex, the family dynamics between Milo and his parents are really enjoyable, and the plot has plenty of twists and turns and different elements that all weave together really nicely. It takes place leading up to Christmas, so it’s a great one for the season, or to read at any point during the winter, and would also make a great family or sibling read-aloud!

Runner-Up: The Importance of Being Earnest (2002) 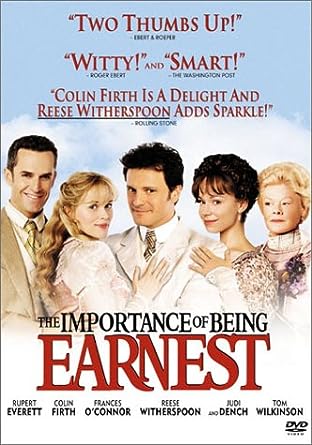 In this movie, Truman is a man whose life is a fake one… The place he lives is in fact a big studio with hidden cameras everywhere, and all his friends and people around him, are actors who play their roles in the most popular TV-series in the world: The Truman Show. Truman thinks that he is an ordinary man with an ordinary life and has no idea about how he is exploited. Until one day… he finds out everything. Will he react? (from IMDb)

This is one of the most thought-provoking movies I’ve ever watched. It’s entertaining, definitely, with plenty of humor and an intriguing premise. But when you start to think harder about the premise, you realize all of the questions that the movie is really raising, and what a serious movie it really is. It leaves you searching, trying to put words to its themes, raising questions of ethics in media, of what reality TV does to our society, of consumerism and entertainment culture. And it does all of this in a carefully crafted story, in which no detail of cinematography, costuming, setting, etc. is overlooked, and in which we are equally made to laugh, cry, and think.

Two young gentlemen living in 1890’s England use the same pseudonym (“Ernest”) on the sly, which is fine until they both fall in love with women using that name, which leads to a comedy of mistaken identities… (from IMDb)

I love this play, and the movie is an excellent adaptation in which everything was done pretty much exactly as I had imagined it. The whole story is an absolutely hilarious comedy of errors, making this probably the funniest period drama that exists. The actors are amazing as well: the cast features Colin Firth and Judi Dench. Overall, it’s just a quality movie that’s full of innocent fun, one that can be watched over and over, on rainy days and sick days, with other people or by yourself, a movie that, at least for me, will never get old.

Have you read/watched my selections? If so, did you like them as much as I did? What are your favorite books and movies of 2018? Share in the comments!

3 thoughts on “Book and Movie of the Year”

Have thoughts or questions? Leave me a comment! I love getting comments from readers and try to respond to each one. Let's start a conversation! Cancel reply